Like most giants of olden times; he had a ravenous appetite, and daily he raided the farmers’ herds and walked off with a choice heifer or fat ox under his arm, devouring it raw. in his forest-cave, which was strewed with bones and horns. Other times he paid a visit to the neighbouring miller and left him poorer by a sack of meal, drawn with his long arm through the mill-window. This he took to his cave, and, mixing it in a large trough, with the blood of the animals he had stolen produced a foul porridge. But, worst of all, if he wanted a very choice morsel, he would carry off a delicate young maiden from some village home, or a child from the cradle.

This was no pleasant neighbour to have, and the inhabitants, more than once, banded themselves together to destroy him, but without a Lord to bolster their courage all their efforts came to nothing. Either they could not succeed in tracking him to his den, or, if they did, the way in which he showed his enormous teeth, roared out his unearthly growls, or played with the young tree he carried in his hand, had. such an effect that his would-be assailants made themselves scarce quicker than they came.

One day Guy, son of Sir John D’Aunay (or Dawnay), of Cowick Castle, came to pay a visit to Joan Darell, the daughter of his father’s old friend at Sessay. Guy was a gallant young soldier who had earned much renown in the wars abroad.

He found her desperately trying to persuade her terrified foresters to return to the woodland and harvest the timber for fuel and repairs to see them through the upcoming winter.

“I have heard,” said he, “of this monster who so terrifies your servants, and devours your tenants’ cattle, and even their children. Is it indeed true?”

“Alas!” she replied “only too true! But come in and take refreshments.”

Now, young Dawnay had come on an errand at which many young men evince a good deal of nervousness, and beating about the bush. But he went directly to the point, and told the strong-minded spinster, the heiress of all the broad acres of the Darells, that he thought a union of the property of the Darells and Dawnays would serve to build up a great family estate. Would she wed him, and so effect this desirable purpose? .

She admired his honesty, and consented on one condition, to prove that he deserved to take the hand of the last of the Darells.

“Name the condition,” said he. “I will undertake the task, whatever it may be.”

She replied: “Slay the monster who is desolating our fields and spreading such lamentation and woe over the village. Rid us of this brute, and my hand is yours”

“Willingly will I try,” was the response; “and if I fall, I shall fall in a good cause.”

It was not much later that the giant paid his daily visit to the village striding purposefully towards the mill, evidently bent on ‘fetching his usual sack of meal. The miller saw him and trembled, but took no steps to protect his property.

“Truly this monster is a fearful adversary!” exclaimed the young knight as he proceeded to buckle on his sword, and he raced out to confront the enemy.

The mill was one of those the top of which, with sails, turns on a pivot with the wind. Suddenly, as the giant was drawing the sack out of the window, the wind changed, and swept the sails round to the side on which he was. Round came the arms, or sails, and one of them, catching the monster on the head, sent him stunned on his back to the ground.

Young Sir Guy saw his opportunity, ran up, and, before the giant recovered his senses, drove his sword through’ the brute’s one eye into his brain.

There were great rejoicings in all the country round. Next day an immense trench was dug, and the enormous carcase rolled into it and buried, amid shouts of blessing upon the deliverer.

Not many weeks afterwards the bells of Sessay rang merrily at the wedding of Joan Darell and young Sir Guy Dawnay. 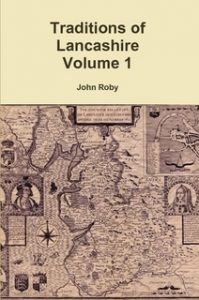