This story, however, has nothing to do with the robbing of the Abbots or Monks of Basingwerke. It is a story of skill and fabulous strength. Indeed, there are many who doubt that the incidents related ever occurred—simply because such things seem impossible. But then those incidents are recorded in the traditions of the people of Longdendale, and, consequently, they are worthy of serious consideration. He must be either an amazingly bold or an exceedingly ignorant man, who would cast a doubt on the veracity of a Longdendale tradition.

However, the reader must judge for himself.

The story has it that bold Robin Hood and his forest band (including the redoubtable Little John, Friar Tuck, Will Scarlet, and Much, the miller’s son, and a hundred other sturdy yeomen, all clad in Lincoln green, and having great long bows of English yew and good cloth-yard shafts) appeared one day in the Longdendale country. Weary of hunting the stag through the woodland glades, they were longing for some chance of adventure to present itself, when they became aware of a loud and dismal moaning hard by. The sound came from a handsome youth who, cast full length upon the sward, was bitterly bemoaning his cruel fate. It appeared that he was betrothed to a beautiful maiden, but her guardian (who was a grim old bachelor) had forbidden their union, and finally, to prevent all intercourse between them, had shut her up in his castle.

On hearing the story the foresters were loud in their denunciations of such heartless conduct. They vowed it was the greatest sin that man could possibly commit—to interfere with lover’s meetings. Little John was for attacking the castle, battering down the gates, and sending an
arrow through the mid-rib of the guardian, which process, he thought, was calculated to end the matter at once. But Robin, though anxious enough for a fight, was of opinion that his henchman’s plan might endanger the maiden, who was completely at the mercy of the tyrant. He suggested an interview, and, accordingly, the stout Friar Tuck was sent as ambassador or emissary to make terms with the maiden’s guardian.

At first the Friar was met with an angry outburst on the part of the guardian—a bold bad baron—who loudly declaimed that he would permit no outside interference with his affairs.

“Out on thee, thou fat-bellied churchman,” shouted the Baron. “What hast thou to do with lovers, particularly maidens. Methinks thy vows should bid thee leave maids and love severely alone.”

Now this sort of talk did not at all suit Friar Tuck, who, churchman though he might be, and shaven and shorn to boot, yet loved to kiss a pretty maid on the sly as well as the best layman who ever walked. But he loved not to be twitted about it in this fashion.

“Fat-bellied churchman, indeed,” quoth he. “And what about thine own fat paunch. As for love and pretty maids, I warrant thou would’st have a long way to travel fore thou comest across a maiden who would fall in love with thee. Such a foul-visaged reptile I never set eyes on. As for beauty—well, as far as thou art concerned—the least said on that head the better.”

The Baron stared at this rejoinder, as well he might. Such language had never been hurled at him before, and for a moment he could scarcely speak, so great was his surprise. When he recovered speech, he ordered his attendants who were in the room to seize the Friar and cast him into the dungeon. But Tuck lifted the quarter-staff which he carried, and brought it down so heavily upon their crowns that the men dropped like poled oxen. At this the Baron began to swear and rave, vowing all manner of punishments for the Friar,—all of which, however, only made Tuck fall a-laughing.

“Come,” said he, “thou art short of wind enough, friend Baron. And if thou goest on like that thou art like to choke thyself. Moreover, if thou only so much as raises a finger to summon thy vassals to thy side with intent to lay me by the heels, I shall een clout thee on the sconce as I have served thy catiffs. So thou hadst best listen to reason.”

Now sorely discomfited as he was, a bright idea suddenly struck the Baron, and turning blandly to the Friar, he readily consented to set free the maiden, and to permit her marriage with her handsome lover, providing the foresters (of whose shooting prowess he had heard so much) could shoot their arrows from the tumulii now called “The Butts” to the upright Druid stones, now known by the name of “Robin Hood’s Picking Rods.” By setting them this (apparently impossible) task, he thought to rid himself of interference from the band; and he chuckled merrily to himself, when Tuck (who knew nothing of the distance to be covered by the archers) coolly accepted the terms.

The time for the shooting display having arrived, the Baron led a gay company to the scene, that he and all his friends might witness the discomfiture of the renowned archers of Sherwood. As for the handsome youth on whose behalf Robin had interfered, he was quite dismayed, and even the assurance of the outlaw could not comfort him, for he thought the feat impossible.

The archers stood at the butts, and away in the distance rose the stone target of “The Picking Rods.” Robin Hood took the first shot, and he laughed inwardly as he drew the string tight and true. For he knew the secret of the “Long Bow”—(as, indeed, do the chroniclers who tell this story). The arrow left the bow with a shrill whistle of the goose-wing tip, and, greatly to the surprise of the Baron, it fell plump on the target with such force as to cut a notch in the hard stone,—a notch so deep that it may be seen to this day. Little John, Will Scarlet, and the rest of the forest band, all tried their skill, and but few failed to hit the mark, though none were quite so near the centre as their leader Robin Hood.

When the shooting was finished the Baron was in a great rage, and he sought for some means of evading the fulfilment of his promise. Turning to Robin Hood he made an offer—that if the outlaw, with his own hands, cast down the great stone which stood upon Werneth Low, then the Baron would not only bestow the maiden upon her lover, but would give her a good dowry into the bargain. On the other hand, if Robin failed to accomplish the task, the whole matter must rest where it was, and the maiden remain a captive.

Greatly to the surprise of all, Robin agreed to the proposal.

“I will humour thee this once,” said he to the Baron. “But if thou attemptest to get behind thy word when the feat is done, my good foresters shall fall upon thee and knock sparks out of thy baronial hide.”

“If thou doest the feat,” quoth the Baron, “rest assured I shall keep my promise.”

For the task he had set bold Robin was, as the Baron well knew, a thousand times more difficult than that of shooting at the Picking Rods.

Robin Hood conversed awhile with Friar Tuck, and then the whole company moved off to the summit of Werneth Low. The stone, or rock, as it should more properly be called, was a huge mass almost the height of a man. It had occupied its position on the summit of Werneth since the world was created. A round half-dozen of the Baron’s retainers failed to lift it. But Robin Hood, casting aside his jerkin, and baring his brawny arm, raised the great stone slowly aloft, and then, with one mighty throw, cast it out westward towards the sunset, and, amid a wild shout of triumph, it disappeared in the distance. 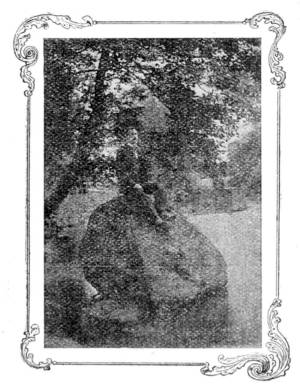 They afterwards found the stone in the bed of the River Tame, near the woods of Arden, and, under the name of “Robin Hood’s Stone” it remains in that same spot to this day.

Now there are some who profess to believe that no mortal power could cast that stone so great a distance, and they explain the event by supposing that Robin was in league with the good fairies, who gave him strength to lift the stone, and then, (invisible to men) flew away with it, and dropped it in the Tame. And perhaps these people may be right.

Be that as it may, there is no record to show that the bold bad Baron disbelieved in Robin’s powers, and we may take it for granted that the lovely maiden was duly released, that she married the lad of her choice, and that they lived happy ever afterwards, as they certainly deserved to do.